Let’s Talk about the Weather: A Review of The Storm Officer by Matt Black – Friday 17 March 2017 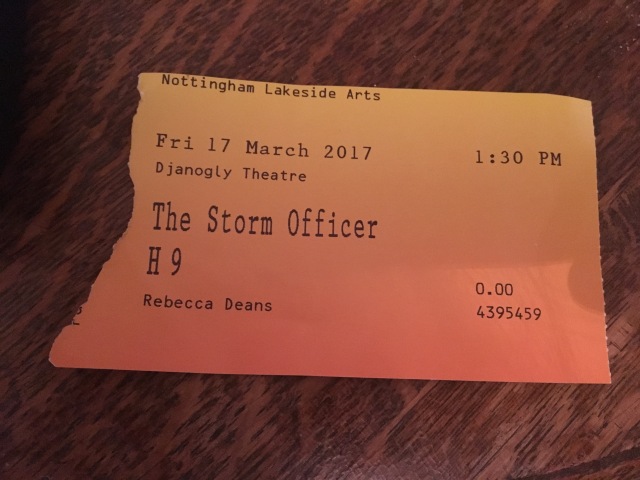 My ticket from Friday.

I haven’t seen many plays recently. The that ones I feel the most comfortable with are Shakespeare and I can’t think of the last time I saw a Shakespeare. Possibly when that lady from Surgical Spirit and Grant from Eastenders did the Taming of the Shrew. I’ve seen (and been in) a fair few musicals, playing the tenor saxophone for Our House and the Strawberry Seller in Oliver most recently.

So I wasn’t quite sure what to expect when I went to see The Storm Officer by Matt Black last Friday.

The first interesting thing for me was the musician/actors. The female part also played the clarinet, piano accordion and a bit of guitar. Even a flourish of recorder. The male lead played the guitar and a piano accordion. I’d never seen a play where the actors provided the music as well.

In some ways the play harked back to the double headers of old. The actors played many characters: the female women and the male men. This was signalled through the showing of handbags to signify ‘retired school teacher’, the naming of characters according to what they liked to drink and the wearing of an apron or a cape.

It was very self-referential and I was constantly jolted back into the reality of the theatre when I was looking for a little suspension of disbelief, but then I guess Shakespeare did that all the time.

Having lived in the Lake District, albeit 19 years ago, the accents also took me off guard. Both actors were doing generic Northern rather well, but they weren’t at all in Cumbria. They weren’t even in Lancaster. Somewhere in mid Yorkshire I would have guessed. And despite many people from many places retiring to Cumbria and the Lakes, I suspect there should have been some Cumbrian accents in there.

The local government response to tragedy seemed very real, and the stories of the people seemed real, but there was something too quick about the delivery to take it all in. This would be easily remedied by the actors speaking to some survivors of the Cumbrian floods.

I felt like I needed an interval after the first half, 30 minutes in this instance.

The second half got me emotionally. It was something about the break-up of the tarmac on the A591, given that I lived in Grasmere and used the buses on the A591 to give myself a break from from the brooding Lakes. Others audience members cried. It was still too fast, and I’m really not sure what happened to the Storm Officer at the end – did he lose his child or his job?

The team around the play managed to set off audience participation through a song with memorable lyrics and the final applause was rousing.

I think I would be very interested to see this play again after it has been to Cockermouth for another developmental showing.

I've always been a writer one way or the other.
View all posts by beckydeans →
This entry was posted in Play Review and tagged accents, Cumbria, Matt Black, Shakespeare, The A591, The Storm Officer, the weather. Bookmark the permalink.